check out our website for current classes, workshops and tours

One Winemaker, Two Countries, All Delicious

I first came across the name of Jean-Marc Espinasse through his wife Kristin's blog, French Word a Day recommended to me by a fellow French student at the Alliance Francais . The blog was (and is) utterly charming- written by an American woman married to a Frenchman,
with two French children, who describes life and language in the south of France so beautifully that you can't wait to visit.

She has also written two books, full of vignettes about life in their village, the 400 year old farmhouse that they rehabilitated, all dotted with french words and phrases used in context to introduce you to the  language as it is used in conversation but rarely included in textbooks.

I came to know her children Maxime and Jackie (who delighted in correcting her French faux pas), and her husband Jean-Marc, who was in the wine trade and helped his uncle with the four ancestral parcels which he had purchased in Chateauneuf de Pape.

Segue forward to Portland, Oregon in March of this year.

I received an email from a former wine student who frequently travels to France where , he had told me, he had friends who were winemakers in the Rhone Valley whom they visited whenever they were in the region.

In the email he told me that one of those friends would be in Portland, pouring his Domaine Rouge Bleu wines and the new vintage of Domaine Banneret from Chateauneuf.

Googling Domaine Rouge Bleu, I learned that the winemaker, Jean-Marc Espinasse, was none other than the husband of Kristin Espinasse and the Jean-Marc I so enjoyed reading about in Kristin's lovely books; and that the Domaine Banneret was none other than the vineyard owned by Jean Marc's uncle Jean-Claud Vidal whose three hectare vineyard in the heart of Chateauneuf dates back to 1405, and which is one of only two domaines that still makes traditional Chateauneuf de Pape using all 13 allowed varietals (the other is Beaucastel).

Doubly intrigued by the two connections I investigated further, and learned that Espinasse recently sold an interest in Rouge Bleu (he is still a financial partner and will continue to market the wine); moved the family closer to the Mediterranean;  purchased Mas de Brun, a property that has never been under vine in Bandol, where he is in the process of rehabilitating an ancient olive grove (with trees as much as 500 years old); clearing land and planting grasses in preparation for establishing a vineyard.

Thee wines we would be tasting would be from Jean-Marc's last vintage at Rouge Bleu, and a wine that Jean-Marc made in Sicily. 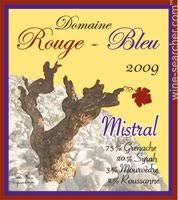 Crafted from more than  70 year old biodynamically farmed  Grenache , Mourvedre , and Rousanne (a few rows found planted among the Grenache), along with younger plantings of Syrah,  the wine is named for the fierce cold and dry wind that tears through the Rhone Valley for most of the year bringing cloudless skies,chasing away humidity and mold, and concentrating the grapes.

This wine reflects its terroir:  full bodied, floral and savory, with aromas of violets and garrigue (resinous herbs that grow wild in the poor soil). On the palate, it is heady, earthy, and mouth filling with  loads of dark berry , cocoa and spice. The acidity is refreshing,  and there are plenty of  fine tannins. As good as it is now, I can't wait to taste it again in 3-5 years 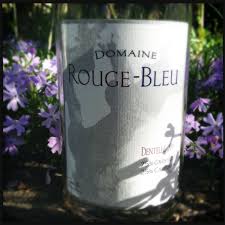 Lots of smoky cherry and black current fruit on the nose and palate of this delicious, elegant wine named for the Dentelle de Montmorail, the upthrust ridges of weathered limestone that overlook the vineyard.


The wine is designated as IGT rather than Cote du Rhone because it draws grapes from  portions of the Rouge-Bleu vineyard both within and just outside of the boundaries of the Cotes du Rhone production zone. Whereas the Mistral will benefit from more time in the bottle, this lovely lady is fresh, joyful, and absolutely ready to drink

I found this wine to be the most intriguing of the series, and a great story.
While on vacation in Sicily in 2010, Jean Marc fell in love with the stark beauty of the vineyard slopes flanking Mount Etna; and and the flavor of a little known yet ancient varietal called Nerello Mascalese. DNA analysis has shown it to be closely related to Sangiovese and is most likely a cross between Sangiovese and an as yet unknown grape.

A 2009 article in the San Francisco Chronicle  highlighted the wines of Etna and the Nerello Mascalese as an Italian alternative to Pinot Noir.

Purchasing fruit from a vineyard of very old vines that the family were not intending to harvest, he partnered with local winemaker Ciri Biondi to produce the 2010 Rosso Azzurro.

I adored this wine.  As lightly pigmented as a Pinot Noir, it is red fruit and baking spice on the nose; bright cherry and strawberry, earth, and above all, spice on the palate with  subtle mineral and fine tannins.  If you can find it, do yourself a favor and grab a few bottles. Do it soon, because only 110 cases were produced.

As Jean Marc noticed my obvious delight in the wine, he stated that he would also like to  make a Pinot Noir in the Willamette Valley and a Sauvignon Blanc in New Zealand.  I hope he does, and I will look forward to tasting them the moment they become available.